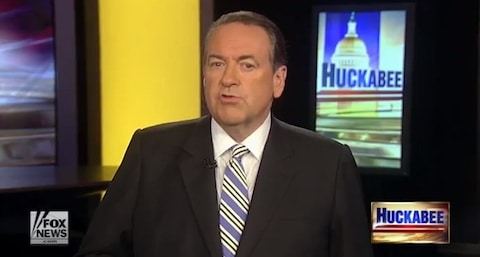 On his FOX News show over the weekend, Mike Huckabee blasted the Supreme Court for going against the will of lawmakers and striking down DOMA. Huckabee went on to say that he's on the right side of history because marriage between a man and a woman has been around for much longer than gay marriage

"Same-sex marriage is newer than Google and the iPod!"

"Despite the frothing of advocates to the contrary, I'm neither a homophobe nor a hater. I'm simple enough to believe that a marriage of one man and one woman not only is the only biological combination capable of creating the next generation, but in the context of a monogamous and committed relationship, it's the best context for children to learn how to replace their parents.

"If we’re determined to change the definition of marriage to accommodate how people feel and what they wish to do because of their mutual consent, then we should immediately release those incarcerated for practicing polygamy or bigamy. And, frankly, let’s make all consensual adult behaviors legal, whether prostitution, assisted suicide, or even drinking 16 ounce sodas in New York City."