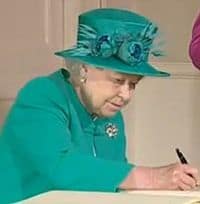 Queen Elizabeth II gave royal assent to the marriage equality bill that cleared UK Parliament this week, ensuring that it will become law, the AP reports:

House of Commons Speaker John Bercow told lawmakers that the royal assent had been given Wednesday — the day after the bill to legalize same-sex marriage in England and Wales cleared Parliament. The queen’s approval was a formality. It clears the way for the first gay marriages next summer.

Gay couples will have the freedom to marry in England and Wales.