The gay co-author of the McCain-Feingold Act is suggesting that a discharge petition might be the solution to get the Employment Non-Discrimination Act (ENDA) passed in the Republican-controlled House, the Washington Blade reports: 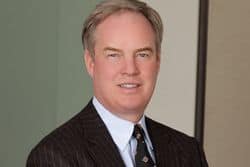 Trevor Potter, a Republican attorney with Caplin & Drysdale who specializes in political law, told the Washington Blade on Tuesday that a discharge petition is “the only way” to get ENDA passed while Republicans remain in control of the House.

“Given the House GOP leader’s opposition to ENDA, and resulting refusal to schedule it for a floor vote, the ONLY way to get it passed in the House is by way of a discharge petition,” Potter said via email. “If the petition gets close to 218 signatures, then the leadership will negotiate.”

Asked whether those words should be considered an endorsement of a discharge petition, Potter replied, “I’m not in the business of endorsing strategies — just commenting on them and analyzing them. I’m just a lawyer, not a political strategist.”

The signatures of 218 lawmakers would bring the bill to the floor regardless of the wishes of House leadership, which would require the wrangling of 40 more supporters to add to the bill's 178 current sponsors, the paper adds.

Freedom to Work is planning the first “situation room” meetings in September and intends to invite executive directors of other LGBT groups to attend — as well as members of the media — to discuss work on ENDA.

Tico Almeida, president of Freedom to Work, said his organization plans to rent the venue and hold a live webcast so the public can watch online and ask questions via Twitter.