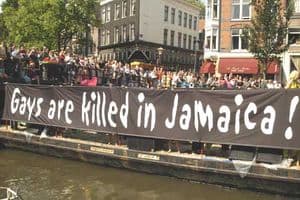 While the straight community may see Jamaica as a more relaxed, easygoing nation, yet another anti-gay hate crime has helped cement the country's status as "the most homophobic place on Earth". 17-year-old Dwayne Jones was attending a party while dressed as a woman. When someone recognized Jones and revealed that he was actually a male, the ensuing mob searched and exposed the teen, "chopped and stabbed him to death" before leaving his body in some bushes, according to the radio station Irie FM. Jones had been dancing with another man at the party that evening.

This is not the first anti-gay hate crime in the country's recent history. Maurice Tomlinson, an LGBT and HIV activist who fled Jamaica in 2012, told The Washington Blade that anti-gay hate crimes have claimed at least nine lives this year alone. He claimed that this is a "400 percent increase in the number of reported attacks against LGBT Jamaicans since 2009." Currently, homosexual acts are still illegal in Jamaica, a criminal offense that can carry up to a ten-year prison sentence.

According to Queerty, "Prime Minister Portia Simpson-Miller spoke out against sexual orientation discrimination and vowed to review the anti-sodomy law". She has, unfortunately, done nothing to honor this promise. USA Today reports that it is only as recently as this past June that any legal challenges have been made to the country's ban on sodomy.

Police have said that they will increase their presence as a result of Jones' brutal murder. The Jamaican LGBT Advocacy group J-FLAG expressed their dissatisfaction with the impotent response.