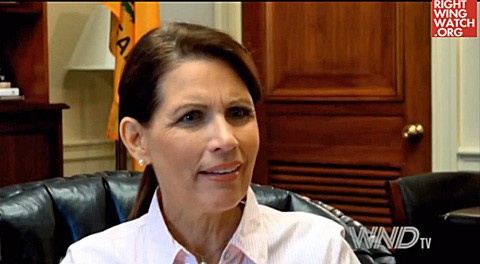 In a video for WingNut Daily, Michele Bachmann sends up a right-wing warning flare about Obama and immigration reform:

"He has a perpetual magic wand and nobody’s given him a spanking yet and taken it out of his hand…That’s what Congress needs to do, give the president a major wake-up call. And the way we spank the president, we do it through the checkbook. We have the power of the purse. The most powerful body in Washington D.C. is the United States House of Representatives, of which I'm honored to be a part.”

In other Bachmann, one of her top aides, Javier Sanchez, was arrested by U.S. Capitol Police for theft last Thursday, the AP reports:

Sanchez is legislative director for Bachmann, a Minnesota Republican. Her office is in the Rayburn office building, where police say the thefts took place. Sanchez has been charged with theft of money or goods less than $1,000 in value.

Sanchez was fired Monday evening, according to NBC.

Capitol Police placed a hidden camera in Room 2417 April 4 and placed two envelopes, one with $80 marked "Petty Cash" on one desk, and another marked "Birthday Money" with $120 on another desk. The money from both envelopes was reported missing June 25.

Surveillance video captured a man entering the office just after 6:30 p.m. June 14. The video shows the man opening the chief of staff's drawer, removing an envelope, counting money and taking the cash and envelope with him, the charging documents state.

July 9, Sanchez' boss identified the man in the surveillance video as Sanchez. The two have known each other since January 2013, according to the affidavit.