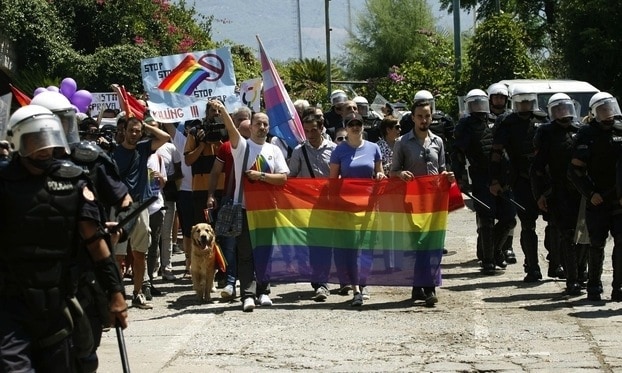 Earlier this week we reported on the very first Pride parade to take place in the small Balkans country of Montenegro. Unfortunately, the event was marred by 200 anti-gay protesters who shouted "kill the gays" and threw stones and other objects at the 40 Pride participants. The marchers shouted their own response to the protesters: "Kiss The Gays."

Zdravko Cimbaljević, the executive director of LGBT Forum Progress, was one of the organizers of Wednesday's parade. He is also the very first openly gay person in the history of Montenegro, having come out publicly in 2010. In an attempt to target and scare organizers of the parade, several of the country's newspapers published fake obituaries of Cimbaljević in the days leading up to the event which took place in the coastal town of Budva. Those phony notices were then seen posted all over Budva.

I spoke to Cimbaljević about the events surrounding this week's Pride parade, death threats and the overall progress of the LGBT community in Montenegro over the last few years. Read our interview with him, AFTER THE JUMP.

SP: Why did you choose the town of Budva as the location of the first pride parade in Montenegro?

ZC: Simply chosen because we wanted to decentralize the whole thing from (the capital) Podgorica. For us, in the LGBT Forum Progress, it is extremely important to work and act in every city in Montenegro. So far, everything related to LGBT issues happened mostly in Podgorica. Besides, the fact that is the summer season, everyone from the whole Montenegro is mostly in Budva, which is the touristic metropolis of Montenegro. In that way, we wanted to promote the idea of inclusive tourism, and the fact Montenegro is open to all people – regardless of their differences.

SP: How did you react to the fake death notices of you posted all over Budva?

ZC: Well, of course it is not a good feeling. The fact that someone put the effort in to make such a thing is terrifying. I woke up that morning, getting ready to continue with the organization of the pride parade, and I got a call from the Police informing me that the obituaries have been put all over Budva. At that moment, i realize it will not be easy, but seeing how the community was energetic and excited gave me strength to ignore it, to put all my thoughts into the organization of this historical event. 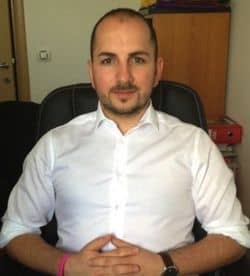 SP: Why did you decide to hold one Pride parade this week and another at the end of summer?

ZC: We realized that the majority of people in Montenegro do not have the basic knowledge about the LGBT population and sexual and gender diversity. On the other hand we knew that the LGBT community lives in fear of outing and is subjugated to violence and hatred on a daily basis. The official attitude of the organization, based on extensive research of the community, was that the majority of them do not want pride to happen. But then we realized, that the best way of the awaken the community, was to organize more Pride and visibility events, which do not necessary have to be walks. So we decided to put these events within the strategic plan of the organization since we realized that the community got the incentive and strong commitment to fight for our rights. We decided to visit all of the municipalities and to show that we are present everywhere and that we are not different or less important than all of the other citizens of Montenegro.

SP: What kind of communication about the parade did you had with government officials and police before the Pride parade?

ZC: We had extremely good cooperation with the police. They were very professional and did their job in spite of their potential personal opinions and beliefs. We were communicating with them on a daily basis, and sometimes even at night because we wanted to inform them of all the potential threats and organized attacks on the parade itself. In the end it is important that they showed the determination to protect us, and to provide us to have a peaceful gathering. Even now, after the gathering we still communicate with them because the organizers and the activists are still getting death threats. The government also provided their support and their representatives, ministers walked with us that day. Some of them even got mildly injured by the stones the protesters were throwing at us. It is important that they were there, because they could see and feel first hand, how does it feel to be marginalized, threatened, and hated for no reason.

SP: What kind of potential anti-gay reactions did you prepare for?

CZ: We are prepared for any kind of reaction. Even the worst ones. A lot of people have been afraid, but in the end everyone decided that it was important that the Pride happens now. Without further delays.

SP: How do you feel the LGBT community in Montenegro has progressed since the cancellation of the planned pride parade in 2010 due to safety concerns.

CZ: It progressed in so many ways. It is now stronger, we have more allies, more programs, more services to offer to the LGBT community, and it is now more vibrant and willing to fight for their rights, than ever.