If Hollywood has its own wild wild west, a mythic frontier to tame, it is undoubtedly a time rather than a place: Next Summer. And the one after that. Release dates famously come before screenplays and the studios start laying down their tracks to get there: concept, screenplay, pre-production, casting, filming, editing, promotion, release though not usually quite in that sensible artistic order. Budgets often balloon on the way to the imagined gold at the end of the line. Or silver, as is the case with the name of a certain iconic horse, and the coveted metal driving the plot and the literal train tracks in the new version of THE LONE RANGER.

Hollywood hasn't revived The Lone Ranger franchise in over 30 years, for what one assumes are three reasons: westerns have been notoriously difficult sells for modern mainstream audiences; the last time they attempted this franchise, it failed; and the Tonto character opens you up to charges of racism and cultural insensitivity in modern times. But if anyone could revive this dead franchise and skirt these issues, the thinking went, wouldn't it be director Gore Verbinski and his masses-beloved star Johnny Depp (rumored to have some sort of Cherokee heritage, and adopted into the Comanche Nation last year) who together did the impossible 10 years ago in Pirates of the Caribbean: The Curse of the Black Pearl, making a well reviewed, Oscar-nominated, mega-blockbuster out of a famous amusement park ride while also navigating another even more notoriously pricey and difficult to sell outmoded genre: the pirate movie!

The director and star aren't so lucky this time around. The film's signature image might just say it all… 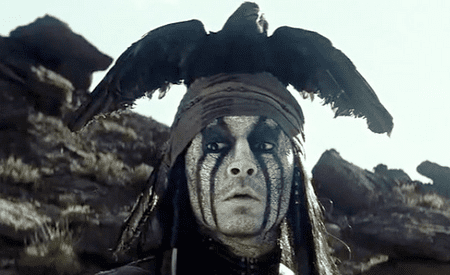 Every five minutes or so (which is to say about 30 times given the interminable running time) Johnny Depp reaches up to pour seed onto the dead bird that crowns his Tonto costume. The seed falls pitifully to the ground, ungobbled. The bird is dead but Tonto, for his part, never seems to notice. When other characters point out the obvious deadness of this animal, he waves their concern aside as temporary inconvenience rather than fact. That's as great a metaphor as any for where we are in Johnny Depp's career.

Johnny Depp is just going to keep doing this shtick absently, and forever, though we're long past the point of it being nutritious. One day, if we're to believe Tonto, the bird will fly again; the depressing monotony of its current state will be but a memory. But can Depp the actor ever rise like a phoenix from the moneyed ash of his career? 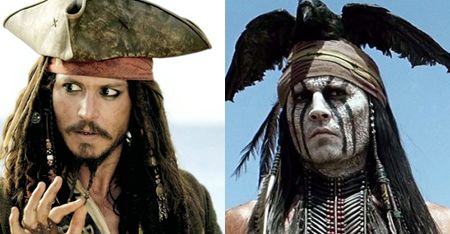 The mega-star's increasingly cartoonish persona should not disguise the fact that he was once one of the world's most brilliant actors. Years of repeating Jack Sparrow (more films are planned) and derivations thereof in Sparrow's lesser cousins (Sweeney Todd, Willy Wonka, The Mad Hatter) shouldn't cloud our memories of the lighting-in-a-bottle surprise of his original blockbuster. Pirates of the Caribbean began Johnny Depp's A List mega-millions phase but it was actually the peak rather than the breakthrough of his imagination and creativity as a film star. From his doubled feature debut in 1990 with John Waters' Cry Baby and Tim Burton's Edward Scissorhands, two very different performances that were nevertheless perfectly pitched and styled for the comedy and pathos of their films, through his delusional cross-dresser in Ed Wood up to and including more recognizably human characters like troubled undercover agent Donnie Brasco and bumbling curious Ichabod Crane in Sleepy Hollow, Johnny Depp was delivering fresh, often great and non-repetitive film performances for a good dozen plus years.

The behemoth success of the now immortal Jack Sparrow character ended the risk-taking. That's an ironic fate given the now famous resistance he encountered to that performance by Disney executives viewing it in dailies and rough cuts who worried that it was just too weird, too fey, and too out there to work for the family crowd.

But back to Tonto.The problems with The Lone Ranger are regrettably more mundane than the odd predicament of Johnny Depp's rutted career. The movie never commits to being any one particular kind of thing in direct contract to the original Pirates which so loved the dead swashbuckler genre that it wasn't just embracing its corpse but humping it lustfully back to life. The Lone Ranger, in direct contrast, seems at least uninvested in the western and even a little embarrassed about itself as in its instant disposable of The Lone Ranger's "Hi-Yo, Silver. Away!" catchphrase (mocked rather than revived) and the way it keeps crushing the fun and laughs with repeated heavy reminders of the Actual Fate of American Indians and violence that's just way too grotesque for a family audience. And it's better not to speak at all of its truly terrible framing device in which Old Tonto tells his story to a little kid in the 1930s which keeps pulling you out of the adventure and must have been a braindead attempt to make it relatable to young kids (guess what, they won't find the 1930s anymore relatable than the 1860s!)

See, you have to know who your audience is and The Lone Ranger emphatically doesn't. There is no box marked "ALL!" under "Target Audience?" though Hollywood keeps trying to write one in. Films which appeal to everyone are beautiful flukes and they only achieve this universal reward by being the very best specific thing they set out to be. Despite a sparkling supporting cast (William Fictner, James Badge Dale, Tom Wilkinson and Helena Bonham-Carter who is contractually obligated to appear in every Johnny Depp picture), handsome sets, and a rousing well mounted finish when "The William Tell Overture" finally kicks in for a crazy fun action setpiece on a speeding train, the movie's already lost in the wilderness. The Lone Ranger rides swiftly past Comanche Territory and into Who Cares Country long before this final act. That's a country that no mega-budgeted summer release ever hopes to get lost in. And there's only a dead bird to guide it.