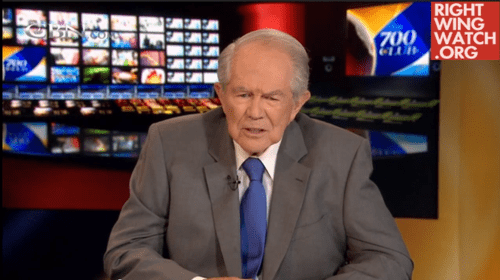 Towleroad is no stranger to Pat Robertson and the many outrageous and bigoted comments that he has made over the years. Just earlier this week, the televangelist expressed a desire for a "vomit" button on Facebook, to be used for photos of same-sex couples.

Now, Robertson is expressing his disapproval of LGBT activists labelling him as "anti-gay", and came to his own defense during an episode of The 700 Club.

“I am very pleased that we have many, many, many homosexuals watching this program and many of them are looking for love and acceptance and help, and I’m glad to report that we have thousands of these people who are saying, ‘yes we want to follow Jesus, we’re not happy with the lifestyle we’re in and we want to have a better way,’ I think it’s wonderful that that’s happening.” 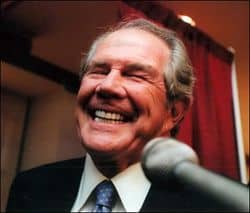 Robertson did not delve into any specifics at to how he obtained data about these supposed gay viewers who managed to convert via watching his program. That didn't stop hiim, however, from explaining precisely what the actual root causes are to alternative sexuality. According to Robertson, people develop same-sex attraction…

“because they have forsaken God, it’s not something that is natural and when people reunite with the Lord, the Lord will get their priorities the way it is supposed to be…. You work through it and if you meet the Lord it should be, it can be instant.”

For those not satisfied with this explaination, Robertson offered a more pseudo-scientific one:

“A lot of people are into this homosexual thing because they’ve been abused by a parent, abused by a coach, abused by a sibling, abused by a friend, they’re little boys and little girls and they don’t know any better and then they somehow think, ‘well I must be gay,’ they aren’t they are heterosexual and they just need to come out of that.”

He also conceded that it is possible that gay people “maybe got some chromosomal damage that’s different from heterosexuals," but that it is still possible to change. Now that Exodus International has officially thrown in the towel, he claimed that it's not up to another group to come in and fill the void and "help people who want out.” Apparently, Robertson does not see these erroneous statements as hateful, and must instead believe that he is simply offering gay people an alternative.

Watch the video, via Right Wing Watch, and decide for yourself AFTER THE JUMP…