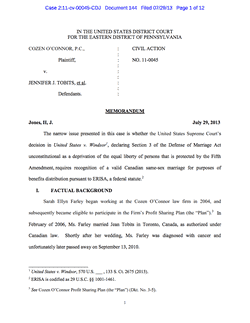 The U.S. District Court for the Eastern District of Pennsylvania issued the 12-page earlier today, citing Windsor v. United
States and the death of Section 3 of DOMA as the chief reason why Jean Tobits is entitled to the proper benefits under the Employee Retirement Income Security Act, or ERISA. Tobits' spouse, Sarah Ellyn Farley, succumbed to cancer in 2010, and Tobits has had to fight for her benefits ever since.

The Washington Blade gives us the background:

"The lawsuit, known as O’Connor v. Tobits, came about in 2011 as the result of Cozen O’ Connor PC, the law firm where Farley worked, filing an interpleader action. Both Tobits and Farley’s parents, who didn’t recognize the marriage of her lesbian daughter, requested payment of the Pre-Retirement Survivor Annuity after Farley’s death that was available under the firm’s profit sharing plan."

The opinion explained that:

“Windsor makes clear that where a state has recognized a marriage as valid, the United States Constitution requires that the federal laws and regulations of this country acknowledge that marriage. In light of that, this Court finds that Ms. Tobits is Ms. Farley’s ‘Spouse’ pursuant to the terms of the Plan.”

What's interesting about this explanation is that Tobits and Farley were not technically "married". Rather, they were recognized in Illinois, their state of residence, as members of a civil union. Illinois is not currently one of the states that recognizes full marriage equality. The two were also "married" in Canada in 2006. Thus, this ruling helps answer one of the main questions that many had in the wake of DOMA's death. Mainly, does the federal government define a couple as "legally married" based on where they had their ceremony, or where they reside?

Doug NeJaime, a gay law professor at the University of California, gave his analysis to the Washington Blade.

“The interesting thing here is that the court finds support for the inclusion of the same-sex spouse based on the couple’s domicile being Illinois, a civil union state. In this sense, the court is suggesting that because civil union statutes give those in civil unions the rights of spouses, that is enough for federal purposes as well.”

This runs somewhat contrary to the Obama administration and the The U.S. Office of Personnel Management. The office's current policy dictates that federal employees must be legally married in the United States, not in a civil union or domestic partnership, to be eligible for partner benefits. NeJaime added:

Chris Stoll, a senior staff attorney for the National Center for Lesbian Rights, also agreed that the court's decision sets a promising precedent.

“The judge noted that Illinois respected their relationship and gave them all of the same rights and benefits as other married couples, but his ruling does not appear to depend on that fact. A couple that was married in any jurisdiction that allows it should be treated the same as any other married couple for purposes of federally mandated employee benefits, regardless of where they live.”