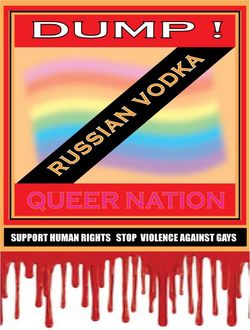 Due to recent human rights atrocities committed in Russia, LGBT and human rights activists are calling for a boycott of Russian vodka. Many celebrities as well as gay and gay-friendly bars across the country have jumped on the bandwagon, prompting a response from the CEO of SPI Group, the company that produces Stolichnaya vodka. Dan Savage has already issued a response to the response. Now, Queer Nation is issuing their own reply in a press release.

Val Mendeleev, the chief executive officer of SPI Group, the owner of the Stolichnaya brand, confirmed in an open letter on July 25 that SPI produces this vodka in Russia and that SPI has offices and operations in Russia. Stolichnaya is a Russian vodka that is owned by a company that was founded in Russia in 1991.

On the same day that SPI released its open letter to the Advocate, we learned that Russian thugs, emboldened by Russia’s anti-gay law, have taken to gay web sites to lure gay people to supposed encounters where they are viciously beaten. This is just the latest in a series of violent attacks against LGBT Russians and foreign LGBT nationals in Russia.

This violence follows news reports of Russian police and prosecutors targeting LGBT people and groups in Russia for arrests and trials. At least two Russian LGBT groups have gone underground as a result.

In the open letter, Mr. Mendeleev cited a few LGBT events where SPI promoted its Stolichnaya brand as evidence of the company’s support for our community. Mr. Mendeleev, marketing will not save LGBT lives.

A single open letter that was discreetly placed with a single gay publication in the US will not help LGBT Russians nor will it have an impact on the Russian government’s anti-gay campaign. This and your refusal made in an earlier statement to confront the Russian government’s anti-gay bigotry make clear that you are not the fervent supporter and friend to the LGBT community you claim to be.

By its own admission, SPI Group operates in Russia and pays taxes to the Russian government. That money funds these continuing attacks on LGBT people and organizations in Russia. Queer Nation will continue its boycott of Stolichnaya and other Russian vodkas until this anti-gay law is repealed and the Russian government guarantees the safety of its LGBT citizens and foreign LGBT nationals in Russia.

We will not help you fund the Russian war on LGBT people.