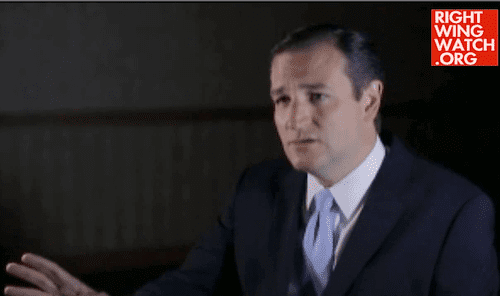 If you look at other nations that have gone down the road towards gay marriage, that's the next step of where it gets enforced. It gets enforced against Christian pastors who decline to perform gay marriages, who speak out and preach biblical truths on marriage, that has been defined elsewhere as hate speech, as inconsistent with the enlightened view of government. I think there is no doubt that the advocates who are driving this effort in the United States want to see us end up in that same place.

No reports yet on any pastors being forced to perform gay marriages that would signal this collapse, but when they surface we'll be sure and let you know!

Check out Cruz's interview, AFTER THE JUMP…

And for those interested, People For the American Way has put out a report on the broader effort of religious right leaders to portray equality advocates as enemies of faith and freedom. Interesting stuff.