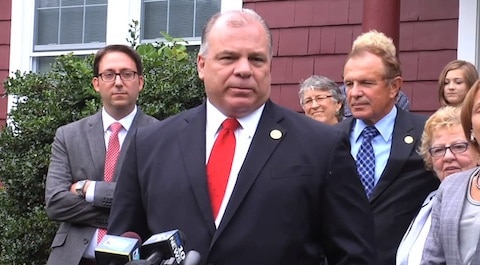 Sweeney urged Republicans to allow a "conscience vote" on the issue given the Supreme Court's strikedown of DOMA, the NJ Star-Ledger reports:

But first, Sweeney said, at least a few Republicans have to change their no votes to yes. The Senate president said Christie has intimidated GOP lawmakers, claiming some have privately admitted they would like to change their votes to allow same-sex marriage.

Later in the day, Christie scoffed at that suggestion, saying he gives advice to legislators but he’s "not the one down there pushing the buttons."

Watch Sweeney make the announcement, AFTER THE JUMP…

Previous Post: « What’s Next: The Importance of the President in a Post-DOMA World
Next Post: DJ Earworm’s Awesome Summer 2013 Mash-Up: VIDEO »