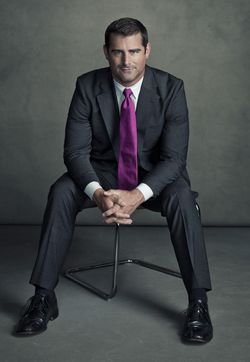 Openly gay Pennsylvania Representative Brian Simms sat down with Hardball last night and discussed attempts by members of his state's Republican party to keep him from speaking about the DOMA ruling. With the start of July comes the beginning of the Family Research Council's "ex-gay" Pride Month. Which just sounds like probably the least fun month ever. Bill O'Reilly has apparently forgotten that he once argued that the GOP should embrace marriage equality as he spent a good portion of his show complaining about the "political" ruling by the Supreme Court.

There has been a rash of attacks in the Washington D.C. area as six members of the LGBT community have reported incidents in the past 10 days. Mike Huckabee is also not happy with the Supreme Court's decision to strike down DOMA, oh and he is also not a homophobe. Also, documents show that Cardinal Dolan moved millions of dollars in assets in order to keep them from being awarded to sexual abuse victims.

Johnny Depp just loves kissing Jimmy Kimmel and Cher talks with The Today Show about the DOMA ruling and her love life.

This grandma's reaction to her grandson's coming out is just the best ever! How deep is the ocean really? And what happened to all those cicadas that were supposed to descend on New York?