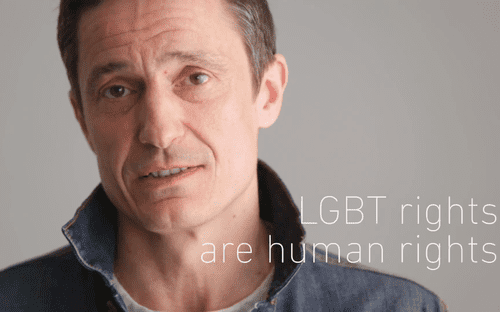 On Friday, the United Nations officially unveiled a global public education campaign called 'Free & Equal,' with the goal of increasing support and awareness for LGBT rights around the world. The Washington Blade reports:

The year-long effort, which the Office of the U.N. High Commissioner for Human Rights unveiled during a press conference in Cape Town, South Africa, seeks to raise awareness of anti-LGBT violence and discrimination and encourage what it describes as 'greater respect for the rights of LGBT people.'

The "Free & Equal" campaign will stress what a press release described as the 'need for both legal reforms and public education to counter homophobia and transphobia.' The Office of the U.N. High Commissioner for Human Rights will also produce a number of videos that are similar to the one it released in May to mark the annual International Day Against Homophobia and Transphobia.

'Changing attitudes is never easy. But it has happened on other issues and it is happening already in many parts of the world on this one,' Pillay said. 'It begins with often difficult conversations. And that is what we want to do with this campaign. 'Free & Equal' will inspire millions of conversations among people around the world and across the ideological spectrum.'

'The [U.N.'s] Universal Declaration of Human Rights promises a world in which everyone is born free and equal in dignity and rights – no exceptions, no one left behind,' Pillay said. 'Yet it's still a hollow promise for many millions of LGBT people forced to confront hatred, intolerance, violence and discrimination on a daily basis.'

Check out a powerful video about the new campaign's mission, AFTER THE JUMP…