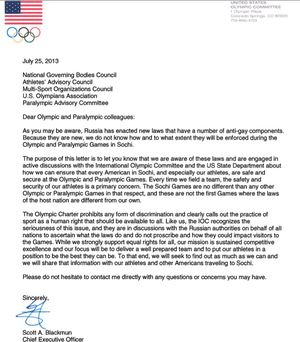 With recent controversy erupting over various anti-gay hostilities taking place in Russia, many have expressed their concerns for the safety and well-being of LGBT athletes who will be competing in the 2014 Winter Olympic Games in Sochi. The International Olympic Committee has already released a statement saying that it has "received assurances from the highest level of government in Russia that the legislation will not affect those attending or taking part in the Games." At least one Russian lawmaker, however, has already made it clear that he wishes for the country's anti-gay propaganda ban to be enforced during the games, a law that has already been used to arrest four Dutch LGBT activists visiting the country.

Now, the U.S. Olympic Committee is joining the discussion. In a letter dated July 25, 2013, and published by BuzzFeed yesterday, Committee CEO Scott Blackmun assures that:

"The Olympic Charter prohibits any form of discrimination and clearly calls out the practice of sport as a human right that should be available to all. Like us, the IOC recognizes the seriousness of this issue."

The letter, also promises that the committee is "engaged in active discussions with the International Olympic Committee and the U.S. State Department" about how to ensure the safety of "every American in Sochi". As to whether this response is deemed satisfactory by American LGBT athletes remains to be seen.