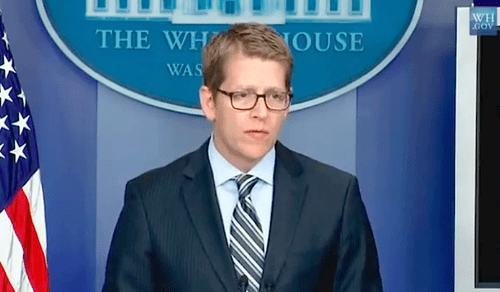 "I will not argue with you when you say there are obstacles that ENDA faces to becoming law, but the fact is, this was a good week in progress towards passing ENDA and the president strongly supports the efforts undertaken by Senate Democrats and some Senate Republicans to encourage the passage of this legislation, and we'll continue to work with the Congress to see it done," Carney said.

"I'm not aware of the calls," Carney said. "I can tell you that the president and this administration makes clear to our allies and partners and nations around the world that LGBT rights need to be respected everywhere, but I don't have a specific – I haven't discussed this with him."

Previous Post: « Terminally-Ill Man and His Partner Fly to Maryland to Marry on the Airport Tarmac: VIDEO
Next Post: Matt Damon Is Humanity’s Last Hope In New ‘Elysium’ Trailer: VIDEO »