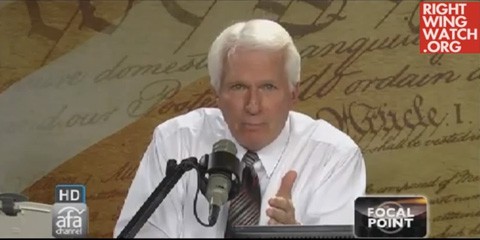 American Family Association spokeshater Bryan Fischer took to the airwaves on Monday to applaud Russia's anti-gay "propaganda" law as an example of the type of public policy he's been advocating for years. Fischer, who sees the law as Putin's attempt to reestablish 'Christian morality' for the country, then wondered why why so few anti-gay activists have been willing to stand up in defense of Russia.

"What Russia's done here with this law is they have expressed the values that we have been advocating for years and years and years….In my mind, we ought to be celebrating this. And I don't know what the timidity is. There's such a hesitancy in the pro-family community to support this law. I'm not sure what the reason for that is. But this is public policy that we've been advocating and here's a nation in the world that's actually putting it into practice."

Fischer's sole criticism of the anti-gay law is that it unfortunately doesn't go far enough to combat the scourge of homosexuality:

"They understand that homosexual behavior is a moral evil among teenagers. Now they need to get to the point where they recognize it's a moral evil for anybody."

Previous Post: « Mayor Cory Booker Responds To Claim That He’s Not A ‘Guy’: VIDEO
Next Post: Republican Senator Tells Gays To Stop Being Whores, Be Like Alexander The Great »