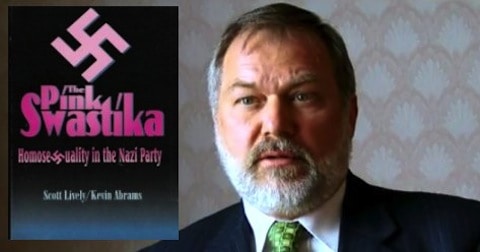 We and other gay blogs have reported on evangelical pastor of Abiding Truth Ministries Scott Lively many times, from him claiming that the rainbow flag was a sign of the end times to hiring child molesters to run his coffee shop. What The Pink Swastika author is most notorious for though is inciting anti-gay hatred in Uganda and aiding in the passing of their "Kill the Gays" bill, a law that is so broadly worded that just touching someone can be enough to be in violation of the law, and heterosexual citizens could receive the death penalty for failing to turn in gay people they know.

US District Judge Michael Ponsor has ruled Lively's persecution of LGBT people a crime against humanity and is accused of helping to play a part in the persecution, arrest and murder of gay people in Uganda. Lively's lawyers, naturally, requested that the lawsuit be dismissed.

As an added bonus, US law allows foreign citizens to sue for violations of international law in US federal courts under the Alien Tort Statute, so Ugandan victims of Lively's crimes have an avenue to seek justice.