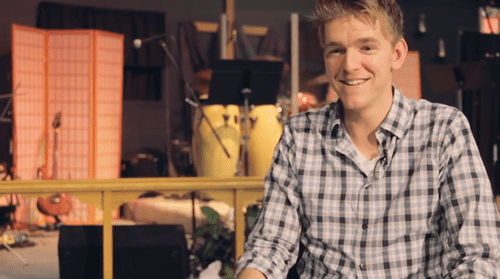 Hey, man. You looking…for a church to go to this Sunday?

A lot of gay men may laugh when they hear that another guy only uses the smartphone app Grindr "just to chat". Perhaps that's how photographer and filmmaker Christian Hendricks felt when he encountered Michael James Alexander Szalapski, an openly gay methodist youth leader from Clarksville, Tennessee, who uses the app to reach out to gay Christians in his area.

Hendricks encountered Szalapski as part of a project called "South of Ohio", in which the filmmaker travels throughout the American South, documenting various interesting aspects of queer culture that he stumbles upon. Previously, Hendricks visited a Creation Museum and attended a PFLAG meeting in Kentucky. Upon discovering Szalapski and his unusual recruiting method, he set up his camera and sat him down for a video interview.

Szalapski discussed a number of things during the interview, including his own struggles with acceptance in the Christian church, as well as his work as a youth leader in his current church in Clarksville. Towards the end, he finally brought up his unorthodox recruiting tool:

"Since I've been coming to the church, I've brought a number of people here who are also gay, usually on Grindr, because I'm quite clear on Grindr that I'm a Christian, and my real main purpose to be there is to be a Christian influence on Grindr, honestly. Because a lot of people think that God hates them, and he doesn't. And any little way that I can help let people know that he loves them is a good one. So people will message me and say, 'hey, you're a Christian? Me too.' And I'm like, 'hey, I've got a cool church that you can come to.'"

Szalapski didn't discuss whether he also used the app for dating or recreational purposes. Then again, the fact that we now have evidence of a church (in Tennessee, no less) that allows an openly gay man to work with young people, despite being open about the fact that he uses Grindr, is likely pretty groundbreaking for those of us familiar with anti-gay "Christians" such as Cardinal Timothy Dolan and the Westboro Baptist Church.

"It's just amazing to see what difference a little sentence on an online profile can make for someone," said Szalapski. "Just that little glimmer of hope that the God that they knew as a kid, that they thought was a loving God and they were told was a hating God…and that one little sentence can give them hope."

Watch the video interview AFTER THE JUMP. Szalapski starts discussing Grindr at around the 3:00 mark.