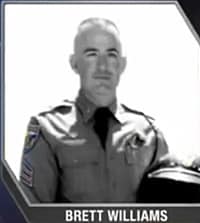 Williams was ultimately denied his reinstatement.

Williams filed suit and State Personnel Judge Mary McClatchey determined that former CSP Chief James Wolfinbarger's procedure for a polygraph and full background check was a departure from the previous chief's policy. The lawsuit prompted an investigation of the culture of CSP and forced Wolfinbarger to step down from his position. McClatchey ultimately concluded that the sole purpose of the polygraph test was to deny Williams the job, which is in violation of law enforcement hiring standards. Williams was awarded over $768,000 in damages and the CSP was required to designate a command-level point-of-contact for gay Patrol members.

CSP of course denies that Williams' orientation was a reason for his rehire and will likely appeal the decision.

Previous Post: « Russian Sprinter: Nothing Gay About Celebration Kiss, and Such Speculation is a ‘Sick Fantasy’
Next Post: Florida Teen Re-Arrested, Continues to Face Felony Charges for Relationship with Female Classmate: VIDEO »