Cory Booker, the Newark mayor running for U.S. Senate in New Jersey, ruminates on speculation that he's gay in a new, lengthy profile in the Washington Post: 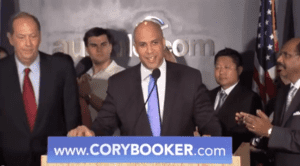 Booker says that his involvement in Waywire is in part a result of his restless mind but also his lack of familial obligations. It is to his “great dismay” that “I have not settled down with a life partner.” He tells a story about how, early in his tenure as mayor, as murders continued to mount, he ran bawling past the places where Newarkers had been shot. He called a pastor friend and told him how broken he felt. At the end of the conversation, Booker expected some spiritual advice.

“You need to get married,” the pastor said.

After that, Booker says, he started dating more — although, he clarifies, not with Arianna Huffington, with whom he was rumored to have been involved. But he has kept that part of his life private because he says he needs some sacred spaces.

“Because how unfair is it to a young lady to put them in the spotlight if they haven’t signed up for that yet?” he says. “And people who think I’m gay, some part of me thinks it’s wonderful. Because I want to challenge people on their homophobia. I love seeing on Twitter when someone says I’m gay, and I say, ‘So what does it matter if I am? So be it. I hope you are not voting for me because you are making the presumption that I’m straight.’ ”