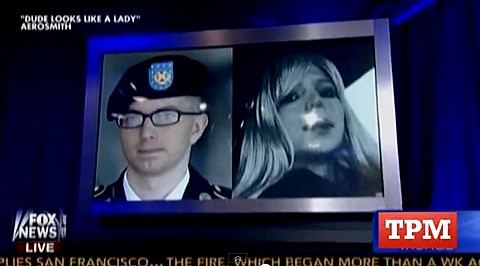 FOX & Friends played Aerosmith's "Dude Looks Like a Lady" over a photograph of Chelsea Manning today, and took the time to caption the title of the song as well, for those listeners that didn't quite get it.

While FOX seems to have decided on the offensive approach to the Manning story a while back, the AP and NYT have finally figured out their approaches, Think Progress reports:

In a blog post announcing the decision on Monday, the AP said the new policy is in conformity with its style guidelines:

The use of the first name Chelsea and feminine pronouns in Manning’s case is in conformity with the transgender guidance in the AP Stylebook. The guidance calls for using the pronoun preferred by the individuals who have acquired the physical characteristics of the opposite sex or present themselves in a way that does not correspond with their sex at birth.

The New York Times confirmed on Monday that it too will refer to Manning as female, beginning Tuesday. Its Manual of Style and Usage notes that for a transgender individual, “[u]nless a former name is newsworthy or pertinent, use the name and pronouns (he, his, she, her, hers) preferred by the transgender person.”

In related news, MSNBC, Slate, Huffington Post, and NPR have all begun referring to Chelsea by her chosen name but CNN has not.