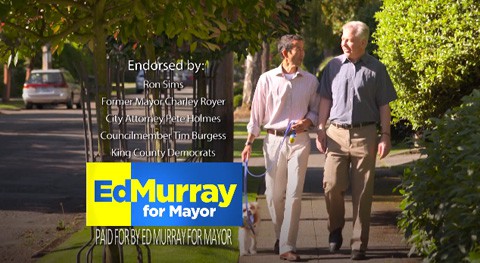 The ceremony marked the end of a years-long struggle for Murray, who had repeatedly used his relationship with Shiosaki as evidence when debating the validity of same-sex marriages to his colleagues in the state legislature. The Seattle Times reports that:

"Last year, when it was clear there were enough votes in the state Senate to pass historic legislation allowing gays to marry, Murray invited his colleagues to his wedding, although a date had yet to be set." 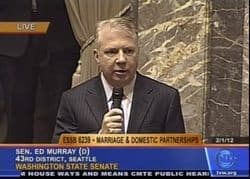 Many of those colleagues were in attendance at St. Mark's Cathedral on Capitol Hill for the couple's traditionally Episcopal ceremony, as well as the champagne reception that followed. Those colleagues included "King County Executive Dow Constantine, former Gov. Mike Lowry, State House Speaker Frank Chopp, of Seattle, and Lisa Brown, former Democratic senator from Spokane." Both men donned black tuxedos and white ties for the event, a look that was described as "very Cary Grant."

Murray, who is in the middle of his campaign for Seattle mayor, told the Seattle Times that he would have preferred to wait until after the November election to go through with the ceremony. Unfortunately, the couple also wished for Shiosaki's parents, aged 89 and 85, to escort their son down the aisle. Thus, the couple opted for a new date: August 10, which also happened to mark the 22nd anniversary of the day that they met. Fortunately (or unfortunately), the couple still plans to honeymoon after November's election.

Murray and Shiosaki have also appeared together in one of Murray's campaign ads for Seattle's mayor, a gesture that still stirs up controversy after Murray's years of advocacy. "Over the years, both received death threats and what they refer to as 'after-death threats' of the  ‘you’ll-burn-in-hell’ variety," reported the Times. But still, according to Shiosaki's best man, Don Botts, the two men are a fine example that any committed couple should aspire to, gay or straight. “They are apart six to nine months every year, but they’ve made it work. Michael’s love and support of Ed is completely evident and visa versa.”