An Iowa ethics board is set to investigate claims that NOM violated state law by not disclosing its donors in a campaign to oust Supreme Court justices, the Des Moines Register reports: 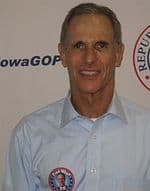 The Iowa Ethics & Campaign Disclosure Board voted unanimously to investigate the National Organization for Marriage, saying that if the allegations against it are proven true, the marriage group’s actions would violate state law.

The decision to investigate is a triumph for Republican former presidential candidate Fred Karger (pictured), who filed the complaint against the National Organization for Marriage on June 13.
Karger said the D.C.-based group spent $635,000 in 2010 and about $100,000 in 2012 to try to oust four of the justices who were part of a unanimous 2009 decision that allowed same-sex marriage in Iowa.

“We caught them,” Karger told reporters after today’s meeting. “I’m so grateful to the ethics commission.”

You can read a copy of Karger's complaint HERE.

NOM responded with anger to the investigation:

"The National Organization for Marriage has violated no campaign finance rules in Iowa, and we decry the decision by the Iowa Ethics and Campaign Disclosure Board to open an investigation," said Brian Brown, NOM's president. "This inquiry is a witch hunt spawned by a delusional homosexual activist who fancies himself becoming the president of the United States and who is a serial filer of frivolous allegations against us whenever we stand up for traditional marriage. The complaint is another attempt to shut down criticism of activist judges and politicians who wish to redefine marriage."

NOM was a major contributor to the 2010 campaign in which voters successfully removed three sitting justices of the Iowa Supreme Court, including the Chief Justice, after the Court voted to redefine marriage in the state. The campaign finance complaint was filed by Fred Karger, a homosexual activist who ran for president of the United States in 2012. Karger has filed complaints against NOM in Maine and California, but no state has ever ruled that NOM violated state campaign rules.

"All that the decision today means is that Karger has alleged actions that, if proven true, would possibly constitute violations of campaign finance rules. But the allegations are dead wrong and the Board action today in no way means that the Board agrees with Karger's frivolous allegations," Brown said. "We are concerned about the continual use of the legal system by Karger and other homosexual marriage advocates who are intent on denying us and the people of Iowa their civil rights to defend marriage as God created it."