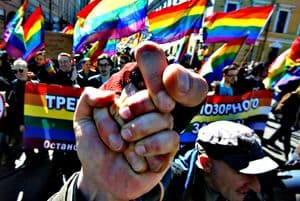 Debate and controversy continues to surround Russia and its anti-gay laws, espcially since the country is set to host some high-profile international events during the next few years, including the Winter Olympics and the FiFA World Cup.

Journalist Julia Ioffe wrote a piece recently for New Republic in an attempt to contribute to these ongoing discussions. Ioffe doesn't take any side on any issue, though. Instead, she simply seeks to add a human element to the debate, and provide several examples of how the anti-gay "propaganda" law impacts actual human lives. These pithy portraits come from both personal acquaintances of hers as well as news stories that she's seen circulate around her.

When combined, they paint a very bleak portrait of gay life within Russia's borders, and provide a cross section of the more violent, compassionate, and resilient aspects of human nature. One story tells of parents disowning their gay children, while another describes a group of friends rallying to support a person who had just recently contracted HIV. One story describes a man who was perceived as gay and subsequently sodomized with multiple bottles before being beaten to death. Another describes a young Russian man expressing his support for his gay younger brother's same-sex relationship.

With the "propaganda" law silencing many LGBT voices trapped inside Russia's borders, Ioffe's portraits are among the few that can circulate freely without posing any risk to those involved. She has even taken it upon herself to change some names to ensure that fact.

You can read the full piece HERE.