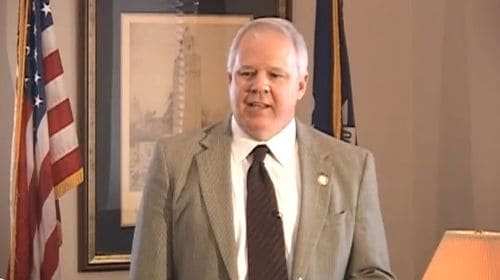 When the U.S. Supreme Court issued its decision on Lawrence v. Texas in 2003, LGBT rights advocates thought that the issue had effectively been put to rest. Unfortunately, in hyper-conservative states like Kentucky, the issue refuses to die for an entire decade.

Louisiana's unconstitutional law has already been used to target and arrest gay men as recently as last month, despite being rendered effectively unenforceable by the U.S. Supreme Court. Sid Gautreaux, the East Baton Rouge Sheriff who conducted the unlawful arrests, called for the unconstitutional law to be removed in his subsequent apology statement. Furthermore, the District Attorney made it clear that he would not prosecute any individuals subject to a sodomy arrest.

Nevertheless, House Speaker Chuck Kleckley recently told the Associated Press that he will not seek to repeal law. Kieckley then refused to expand on his position any further, and did not provide any sort of explaination regarding his stance. Thus, it is not clear whether he would support, resist, or ignore the measure if it was proposed by another lawmaker.

Previous Post: « Journalist Chronicles Gay Life In Russia With Eight ‘Horrific And Uplifting Stories’
Next Post: Hitler And Putin: History Is Repeating Itself »