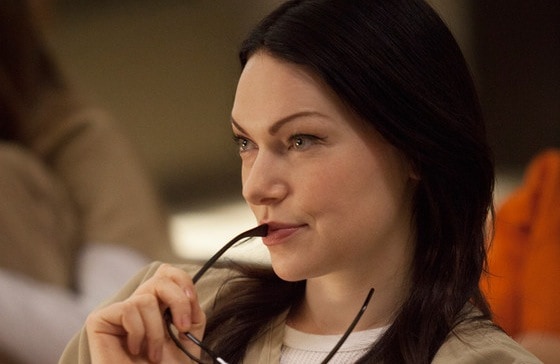 If you haven't seen Netflix's Orange is the New Black, you're missing out on a terrifically entertaining and well-written show which features several well-crafted LGBT characters.

Laura Prepon had originally auditioned for the lead role in the show but was eventually cast as lesbian drug trafficker Alex Vaus. Canada.com interviewed Prepon about how excited she is to portray a lesbian on television as well as her fanbase in the LGBT community. Read a segment of the interview below:

Do you think there’s still a stigma to playing a lesbian on television?

"…there are a lot of lesbians on this show. Besides the L Word there aren’t lesbians portrayed like this on television. For me, I’ve never played a lesbian before and I think it’s awesome. As a learning experience playing this love for someone on camera and having it be a women was very interesting because I’m straight and I’ve only done it with men on camera.

There is a big gay and lesbian community out there and it’s good to have more relationships on television that they can relate to and I’m glad we could be a part of that.

Have you gotten any fan letters from that community?

Dude, lesbians love me. I’m tall, I have a deep voice, I’m like, ‘Hello, catnip!’ Now that this show’s out I’m curious what happens from here because whenever I go out lesbians try to, y’know, ‘turn me.’

One of my really good friends in L.A. manages one of the biggest gay bars in L.A. and I’m usually there with all of my girls and immediately everyone thinks we’re lesbians because we don’t act like normal girls do — meaning that I grew up with guys and the reason I hang out with these girls is because they’re not girly girls. We go out with no make-up and our hair in a pony-tail just rocking it out like ‘Who cares?’ So when I’m hanging out at this place there’s been a couple of instances where I’ve had to say to girls ‘You’re awesome, but I’m straight.’ And they never believe me! But whatever, we’re all just looking for love so who cares?

There have been conflicting reports this week about Prepon leaving the show. The official word from Netflix is that those rumors are "not accurate."

Previous Post: « Rush Limbaugh: ‘If You Believe In God, You Can’t Believe In Global Warming’
Next Post: Russian Anti-Gay Policies ‘Could Kill Its Cities’ »