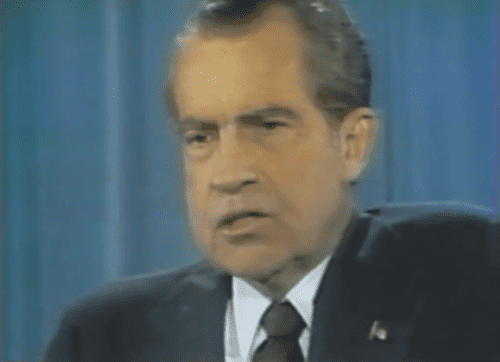 Richard Nixon's presidency was not a high point of twentieth-century politics. Nor did his congressional participation in the House Un-American Activities Committee indicate an emphasis on human understanding or interaction. But new audio unveiling a conversation between Nixon, Domestic Affairs Advisor John Ehrlichman, and Chief of Staff H.R. Haldeman reveals a quite vocally homophobic Dick and two men unwilling to disagree. A previous recording indicated a certain "understanding" of homosexuality, on the most basic terms; this one complicates the matter and paints Nixon in a different light.

This is brilliant. They’ve found new audio of then-President Richard Nixon complaining about a TV show he stumbled upon that was glorifying homosexuality: “All in the Family.”

It’s hard to imagine Nixon wasn’t familiar with All in the Family.  The show was centered around the father of the family, Archie, who was a lovable bigot, and the show basically lampooned Archie’s biases in order to show how absurd they really were.

The conversation (transcript by Aravosis) went something like this:

Nixon: CBS came on with a movie. They had two magnificent handsome guys, and a stupid old fellow in it. They were glorifying homosexuality!

Ehrlichman: Was that a panel, sir?

Nixon: Hell no, it was a movie!

Haldeman: No, that’s a regular show, it’s on every week. And usually it’s just set in the guy’s home. It’s usually just that guy, who’s a hardhat.

Nixon: Archie is the guy’s name.

Nixon: The point that I make is that goddamit, I do not think that you glorify, on public television, homosexuality!  You ever see what happened, you know what happened to the Greeks? Homosexuality destroyed them. Aristotle was a homo, we all know that. So was Socrates.

Ehrlichman: But he never had the influence that television has.

Nixon: The last six Roman emperors were fags. You see, homosexuality, immorality in general, these are the enemies of strong societies. That’s why the communists and the left-wingers are pushing it. They’re trying to destroy us.

Nixon's lack of historical integrity, the period phrases (like "hard hat"), and an inability to tell the difference between a television movie and a regular series are mildly humorous in retrospect. More important, however, is that Nixon's emphatic anti-gay stance is eerily disturbing, and his words show that President and bigot were not mutually exclusive.

Watch a video with subtitles, AFTER THE JUMP…