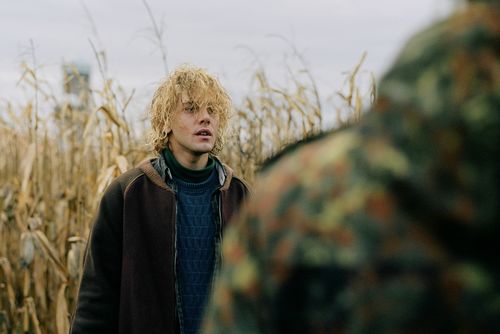 For the last six years, the Venice International Film Festival has awarded the Queer Lion to the year's 'best movie with LGBT themes & queer culture.'  This year, nine of the festival's films–and two which are in the official competition–will vie for the award, reports The Hollywood Reporter:

Xavier Dolan’s Tom at the Farm and Via Castellana Bandiera from Emma Dante will be among the nine films selected to compete for the seventh Queer Lion award at the upcoming Venice Film Festival.

The Queer Lion is given out each year to a film screening in an official section – in or out of competition, in the Venice Days, Critics’ Week or Horizons sections -– that “accurately portrays lesbian, gay, bisexual or transgender characters.”

Tom at the Farm – a drama about a man (played by Dolan himself) who meets the family of his recently deceased lover, unaware he was gay – and Via Castellana Bandiera – about a lesbian couple in Sicily for a friend’s wedding – are the only two films vying for the award from Venice’s competition lineup.

The Queer Lion will be awarded by a special jury led by Angelo Acerbi, a programmer at the Turin Film Festival, who will be joined by Queer Lion founder Daniel Casagrande and Marco Busato of CinemArte, an Italian arts nonprofit.

This year's Venice Biennale will take place from August 28 through September 7.  Take a look at the trailers for two of the films vying for the Queer Lion–Johanna Jackie Baier's Julia and John Krokidas's Daniel Radcliffe-starring beatnik rom-dram Kill Your Darlings—AFTER THE JUMP…