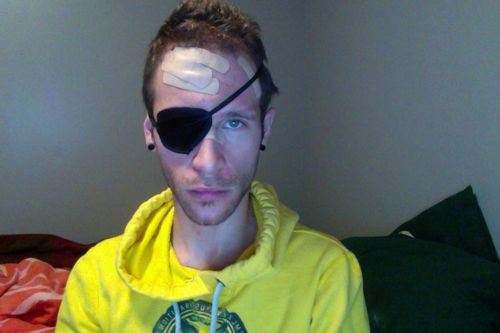 Late Thursday night, Patrick Blackburn of St. Johns, Newfoundland, was walking by himself when he was verbally harassed by a group of homophobes. "I heard a bunch of people behind me calling me a fag," he said in a YouTube video. “It didn’t bother me, so I just kept walking. I heard footsteps.” That's the last thing he remembers before waking up in the hospital. At that point, he had received 18 stitches, and suffered damage to his left eye as well as short-term memory loss.

Shortly therafter, Blackburn took to Facebook and YouTube. Blackburn's Facebook profile photo still depicts him with bandages and an eye patch on his face. One status, which was posted the following day, read:

"Thanks for everyones concern, means a lot – Again Sheldon Steven Burke saved my life a jumping last night – I have short term memory loss – I dont remember NOTHING – a police report has been made on my behalf – I remember walking home seeing 3 guys and waking up in a hospital where the doctors said I lost a lot of blood and i came in unconscious – Battered and brusied and have a HUGE gash on my forehead - I was released shirtly after i woke up..Thanks to staff! Im in a lot of pain and I cannot answer anymore questions about police, hospital, or the assailants. I'm sorry when this comes back to me i'lll let you know. ALSO i could kill for some company..im afraid to close my eyes." 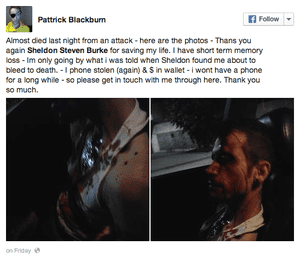 Another one displays two rather graphic photos of Blackburn taken just minutes after he was found bleeding in the street. “It’s really scary when somebody tells you that if you weren’t found 10 minutes before you would’ve bled out and died,” he said in his YouTube video, which was later taken down.

Authorities in St. John are still investigating the anti-gay hate crime. Meanwhile, members of the city's LGBT community are shock and appalled. Noah Davis-Power, president of St. John's Pride, told The Star that:

“I’ve always thought of St. John’s and Newfoundland as a whole to be pretty safe from that. You have ignorant people like anywhere does, but there’s never been any violence to such a degree towards our community.”

"It makes you wonder; am I going to get beat up when I go downtown if I dress a bit more flamboyantly, or if I'm holding my partner’s hand," he added in a statement to the Huffington Post. Meanwhile, members of Queer Ottawa have also taken to social media, announcing a fundraiser that will be helf this Friday in Blackburn's honor.