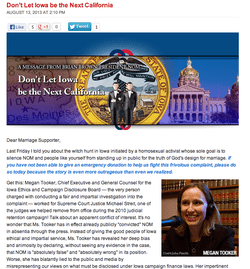 In the wake of Iowa's supreme court ruling that legalized marriage equality in the state, the National Organization for Marriage launched a campaign attacking three of the court's justices, in attempt to get them replaced. According to a complaint filed by Fred Karger, NOM resorted to some questionable fundraising tactics during the campaign, and refused to disclose the names of their donors after repeatedly being asked to do so.

Karger's compaint subsequently launched an investigation by the Iowa Ethics & Campaign Disclosure Board after the group voted unanimously to pursue it. NOM President Brian Brown was obviously not happy, a fact that likely surprises no one. Anyone familiar with Brown's history of distorted and inflammatory remarks could likely expect a stong reaction, which he promptly posted on NOM's blog. In the post, Brown chose to especially single out the board's chair, Megan Tooker, alleging a few bold accusations:

"The people of Iowa are entitled to the highest standards of ethical conduct and independence from the state’s top ethics officer, but Megan Tooker has shown herself to be biased and incredibly unprofessional in her handling of the complaint against NOM. Ms. Tooker worked for one of the justices we helped remove from office in 2010 and which is the subject of the complaint she is evaluating. At a minimum this presents the appearance of a conflict of interest. Furthermore, her comments to the media reveal deep-seated animosity toward our position and are grossly inaccurate, prejudicial and inappropriate. We demand that she be removed from having any role in evaluating the complaint filed against us.

"By blatantly misrepresenting our position in the media, Ms. Tooker has in effect convicted us in absentia, without conducting any investigation or receiving any evidence. She’s prejudiced our case by lying to the media about our position on critical matters, and then declaring us to be ‘absolutely wrong’ and ‘absolutely false’ in our defense of the complaint. Clearly, this is not the kind of ethical behavior one would expect from the state’s top ethics officer, someone charged with conducting a fair and impartial investigation into the facts, and then carefully applying the facts to the law. Rather, it shows the deep bias she holds toward us for having helped unseat her former employer." 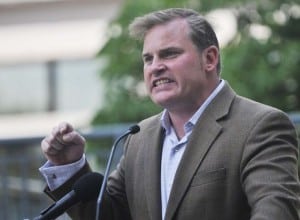 As was noted by ThinkProgress, Tooker's former employer, the supposed justice in question, was not the only judge to issue the decision in favor of marriage equality–the decision was unanimous, and NOM was only able to remove three of the four justices in that Iowa supreme court. Furthermore, Tooker was not the only member of the board to vote in favor of the investigation. That decision was also unanimous. Even if Tooker was as biased as Brown's claims painted her to be, there was an entire rest of the board to help counteract that.

ThinkProgress also reported on an event that took place in Iowa over the weekend, during which Brown attacked Karger, the person responsible for the compaint that launched the investigation. "Karger told On Top magazine that Brown 'just began to lash out at me' and was 'clearly bothered.' Indeed, NOM has been fighting to hide the source of its funding in every state it has campaigned, so Brown may well have reason to be concerned that the ruse could soon come unraveled."

According to an update, NOM is now using the investigation as yet another excuse to solicit donations on their official site.