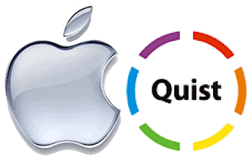 Last month, we reported on a great new educational app called Quist that teaches users a daily history lesson related to LGBT culture, politics, and movements. The app has had a very successful launch, having already been downloaded over 10,000 times in its first month alone.

Yesterday, however, the app hit a bit of a snag when the owner attempted to update the text of the iTunes App Store description and received the following message from Apple:

"The following is not recommended for use in this field: bisexual. Your app may be rejected if you use this term"

In response, Quist began an online change.org petition to get Apple to remove 'bisexual' as an unacceptable term for use in app descriptions. Within 24 hours, word of the petition spread across the web to GLADD, Queerty, and Buzzfeed and Apple quickly called Quist directly to inform them that the term 'bisexual' will no longer be a flagged or spam word in the App Store in the future.

A great example of the power of petition!