According to a Defense Department memo obtained by the Associated Press, the Pentagon is ready to extend benefits including housing and health care to the same-sex spouses of service members. However, rather than providing benefits to declared gay partners who are not married (which was in an earlier plan) the new plan would offer up to 10 days of leave to gay service members so they can travel to states where they may marry legally. 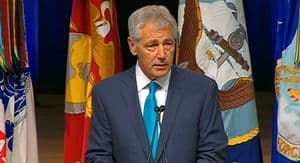 While no final decisions have been made, the memo from Defense Secretary Chuck Hagel to top defense leaders would reverse an earlier plan that would allow the same-sex partners of military members to sign a declaration form in order to receive limited benefits, such as access to military stores and some health and welfare programs.

"As the Supreme Court's ruling has made it possible for same-sex couples to marry and be afforded all benefits available to any military spouse and family, I have determined, consistent with the unanimous advice of the members of the Joint Chiefs of Staff, that the spousal and family benefits far outweigh the benefits that could be extended under a declaration system," Hagel wrote.

The plan is scheduled to take effect by the end of August.