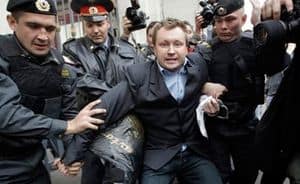 Russian gay rights activist Nikolai Alekseev is thought to have either been abducted or to have gone crazy after a series of troubling status updates appeared on his Facebook wall this past weekend. Though his Facebook profile has since been taken down, furthering the suspicion that it had been hacked, Queerty has screenshots of some of his more bizarre posts and include him accusing Russian gays seeking "fake asylum", accusing friends of being pedophiles, and hating the West for being on par with Putin. Even more disturbing, So So Gay reports that photos of Alekseev in his underwear in a bunker were posted to his account before it was taken down under the album title "Kidnapping" with a status update referencing a "porno contract."

Activist and blogger Melanie Nathan is highly skeptical of the situation, and in a lengthy post compares his prior behaviors with the present situation. In the past, she has seen Alekseev become "unhinged" when people disagreed with his definitions of asylum and oppression, and that he holds the stance that gays should not leave Russia to flee their persecution. More damning is that the last time he was allegedly "kidnapped" he was in fact on vacation with his wealthy Swiss boyfriend, and anecdotal encounters with him in the U.S. have established that "unhinged" is his default setting.

This is a developing story, but regardless of the outcome, this is a setback for gay rights activism in Russia.