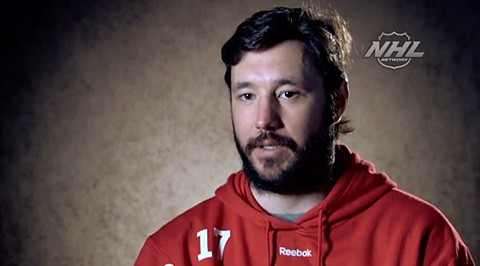 This morning I posted a couple of reactions from Team Canada's Sidney Crosby and Shea Webber to questions at about Russia's anti-gay law at a weekend press conference.

Crosby and Webber both disagree with the law, but at least one former NHLer, now a player in Saint Petersburg, Russia, is toeing his country's line, SI.com reports.

Said Kovalchuk when asked about the draconian Russian law:

“I agree, of course,” said Ilya Kovalchuk. “I’m Russian and we all have to respect that. It’s personal and, like I said, it’s a free world, but that’s our line. That’s our country, so everybody has to respect that.”

Meanwhile, more of Team Canada has weighed in:

“It’s hard to go into a country that supports something like that,” said Capitals goalie Braden Holtby. That said, he’s not in favor of boycotting the Games. “I don’t think that would do any good. I think it would cause more problems than it would solve. But I think it’s an opportunity for athletes to get together and support a cause that I think a lot of us really have a passion for. And I think we can do lot of good for it.”

Said Sharks veteran Dan Boyle, “I don’t agree with [the laws]. I just don’t agree. I think, gay or not, that shouldn’t change anything. Not a big fan of that.”

“I was part of that ‘You Can Play’ campaign, and I know a lot of guys who are going to be on Olympic rosters,” said Lightning sniper Steven Stamkos. “It’s a little uneasy with what’s going on over there, but there’s a lot of time and I think things can change.”