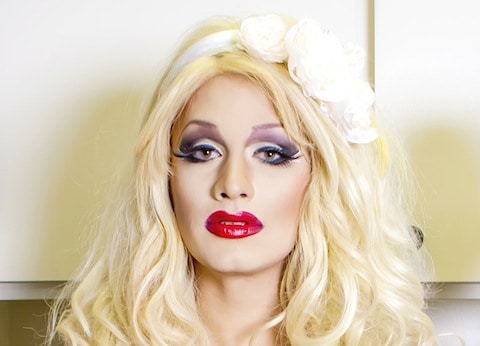 Back in January, the world was introduced to “Seattle’s premier Jewish narcoleptic drag queen," Jinkx Monsoon, on season five of RuPaul’s Drag Race. By the time she broke out a note-perfect impersonation of Little Edie Beale from Grey Gardens, she had won the hearts of viewers. From there, she went on to win the crown.

Before she was rubbing elbows with the likes of RuPaul and celebrity judges Juliette Lewis, Bob Mackie and Paulina Porizkova, Jinkx (not yet a Monsoon) was a silent character created by Jerick Hoffer. When asked to host a drag night, Hoffer performed an impression of his mother, and Jinkx as we know her today was born.

As the reigning Drag Race champ, Jinkx says “doors are opening to play the roles I always thought I should be playing.” That includes the brilliant show The Vaudevillians, in which Jinkx appears alongside her musical collaborator Major Scales as two vaudeville performers recently reanimated after being frozen alive. Debuting in New York in July, the critically-lauded musical comedy’s run has been extended through August.

We caught up with Jinkx in New York to talk about her experience on the show, what’s next and what makes her approach to drag so special. 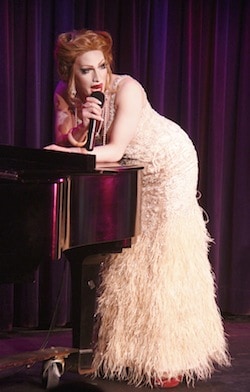 Towleroad: Give us an update, what's life been like since winning?

Jinkx Monsoon: It's been a whirlwind. For example, I haven't been home in a month. We're living out of a hotel in New York right now, that's something I've never done before. It's just kind of been non-stop. We had the Absolut tour shortly after I won. Then I've been doing my own tour, just making guest appearances. I did a bunch of spots for Pride, but I've also kind of made sure to still do the projects I've always done, just kind of take those to the next level. I still do a lot of the local shows. I do two annual shows, “Homo For the Holidays” and “Freedom Fantasia,” which are with the same production company in Seattle, DeLouRue Presents. Then we've been doing our show in New York since the beginning of July, and it goes until the end of August. That's The Vaudevillians at the Laurie Beechman. Next month I start working in earnest on my album. The working title right now is The Inevitable Album.

JM: It's a little eclectic …

JM: It's a mix of original songs written by my music partner, Major Scales, who I do The Vaudevillians with, and some standards. We're working on a Kurt Weill song and some of the songs that we do in The Vaudevillians. Then, of course, because I’m a comedy queen, there are a couple of showtune parodies that I'm known for, and then one bonus track that's a dance-rap track. Most of the drag queens that have produced music after Drag Race have all been dance hits. Not that I wouldn't love to produce an album of dance hits, it's just never really been my style to make electronica music. I figured they're all doing so well at that, I should give something else a try.

TR: So what's it like watching the show back as it airs after having lived it?

JM: It's really surreal because certain parts of it I was dreading to have to watch again, and certain parts I felt like I was seeing for the first time. I don't even remember being present for certain things. When you do reality TV, you kind of go into what I call a reality-TV trance, where you're very much aware of everything, but also you're kind of glamoured by the fact there's cameras, there's 50 people in the room with you at any given point, you're meeting famous people and all that stuff. It was really hard to always know that it was real and not a dream or something.

TR: Did seeing any footage back change your relationship with any of the girls following the show?

JM: I saw some of the things they were saying behind my back, but I knew that, with editing, they can take moments from anything and make it look like it's applied to the current scene. By the end of filming, I had a good relationship with every one of the girls. Even the girls you see me feuding with on the show, I have their cell phone numbers and we text, and we check in with each other all the time. Mainly Coco [Montrese] and Roxxxy [Andrews] were the ones I got into the real spats with, and both of them are close to me now. The ones I'm closest with now are Alaska, Ivy [Winters], Honey [Mahogany] and Jade Jolie. But I really feel like I have a good relationship with all of the girls, because we went through something only the 14 of us went through this year. There’s no way to really fully explain the experience to anyone who wasn't present for it.

TR: What's one thing people would be surprised to learn about being on RuPaul's Drag Race?

JM: It's not easy. I think the thing that was hardest for me, beyond being in the competition and beyond what was at stake, the thing that was the hardest for me was the isolation from my friends and family. Drag is a collaboration of who you are. Everyone has their drag family, in some sense of the word, and I'm very, very close with my chosen family in Seattle. So it was really, really hard to come up with ideas without having someone to bounce it off of.

TR: In your web series, you talk about how you're an actor and when you're in drag, you're an actor playing a part. How do you think that differentiates your approach to drag?

JM: What I learned in college when I studied commedia dell’arte, or clown form, is that you have to find a way to create a character that you can live as. It's not just like you come up with lines and you deliver them, that would be traditional acting, but with commedia dell’arte, which is what I think I'm doing with my drag, you create a character who has their own life and their own backstory and all their own mannerisms and characteristics and affectations and all that stuff. Once I'm fully in drag from head to toe, I feel like then I step into Jinkx. I'm still there, and it's still all improvised and it's still all in the moment, but I truly believe that I step into a character and I'm just living as her. All of my friends note certain differences between when I'm in drag and when I'm out of drag.

JM: It's meta, but I always say it's Jinkx as Kitty Witless. Oftentimes, I get into Jinkx drag, walk to the venue, change into Kitty, and then, at the end of the show, change back into Jinkx, walk home and then change into Jerick.