Dexter is a 2-year-old boy who happens to love to wear pink headbands. His mother, Katie Vyktoriah, a stay-at-home mom and blogger, posted a horrific tale over the weekend of the experience she had when she took Dexter to Walmart. The post immediately went viral and brought down her site due to the traffic. 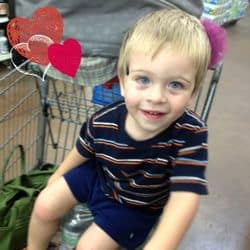 The story is reposted at the HuffPost, and the unfortunate encounter her son had with an ignoramus began after two girls giggled at her son in his pink headband.

Out of nowhere a big booming voice rang out. "THAT'S a BOY?!" The man was overly large with a bushy beard and a camouflage shirt with the arms cut off. He had tattered shorts and lace-up work boots with no laces. I could smell the fug of cigarette smoke surrounding him, and there was a definite pong of beer on him.

With no notice, the man stepped forward, grabbed the headband off of Dexter's head and threw it to the bottom of our shopping cart. He then cuffed Dexter around the side of his head (not hard, but that is not the point) and said with a big laugh, "You'll thank me later, little man!"

At the same time as I stepped forward, Dexter grabbed his head where the man had smacked him and threw his other hand forward, stomping his foot and shouting, "NO!" I got between my son and this man and said very firmly, "If you touch my son again, I will cut your damn hands off."

The guy snarled at me, looked at Dexter with disgust and said, "Your son is a f*cking fa***t." He then started sauntering out, but not before he threw over his shoulder, "He'll get shot for it one day."

I stood there, shaking, fists clenched, waiting for the man to disappear out the door, and then I fell apart. I was shaking so hard, holding back tears and comforting Dexter.

Not a single person said or did anything. There were several people who had witnessed the encounter, but not one of them came over to offer support or console me or my son.

Let me repeat to you: Dexter is 2 YEARS OLD.

The story continues at the HuffPost. Apparently there's also an update at Vyktoriah's blog but it's still inaccessible.