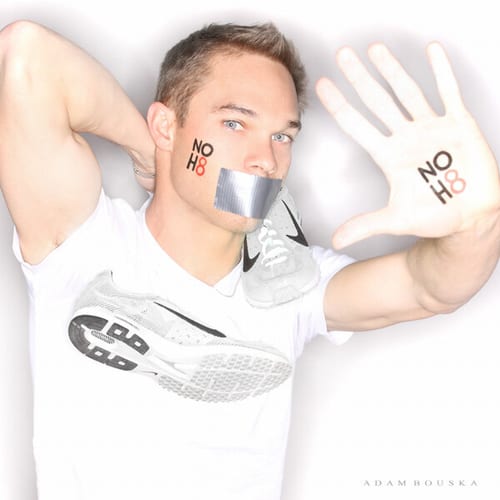 In a blog post published Wednesday, two-time U.S. Olympic runner and ally Nick Symmonds joined a growing chorus of athlete voices in speaking out against Russia's anti-gay propaganda law. Symmonds used the post to reiterate his support for LGBT rights and express his desire to keep politics off the playing field in Sochi next year.

As an American, I believe in freedom of speech and equality for all, and therefore disagree with the laws that Russia has put in place. Given that I am currently residing in London, I will say, once again, that our LGBT neighbors deserve all the same rights as the rest of us. However, as an American who is about to reside in Moscow for 12 days [for the track and field world championship], this will be the last time I will mention this subject.

I will say now what I said before the 2008 Olympic Games in Beijing, China, when people asked me how I felt competing in a foreign country with questionable human rights standards: The playing field is not a place for politics. In a world rife with never-ending political battles, let the playing field be where we set aside our differences and compete for national pride and the love of sport.

If I am placed in a race with a Russian athlete, I will shake his hand, thank him for his country's generous hospitality, and then, after kicking his ass in the race, silently dedicate the win to my gay and lesbian friends back home. Upon my return, I will then continue to fight for their rights in my beloved democratic union.

Hopefully, Symmonds will follow fellow athlete Blake Skjellerup's lead in wearing a rainbow pin at the upcoming Games as a sign of silent solidarity with human rights and LGBT equality.