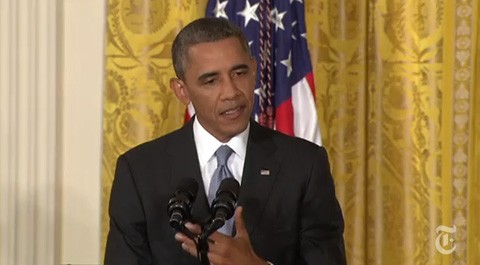 I know that one question that's been raised is how do we approach the Olympics. I want to just make very clear right now I do not think it's appropriate to boycott the Olympics. We've got a bunch of Americans out there who are training hard, who are doing everything they can to succeed. Nobody is more offended than me by some of the anti-gay and lesbian legislation that you've been seeing in Russia. But as I said just this week, I've spoken out against that not just with respect to Russia but a number of other countries where we continue to do work with them, but we have a strong disagreement on this issue.

And one of the things I'm really looking forward to is maybe some gay and lesbian athletes bringing home the gold or silver or bronze, which I think would go a long way in rejecting the kind of attitudes that we're seeing there. And if Russia doesn't have gay or lesbian athletes, then it probably makes their team weaker.