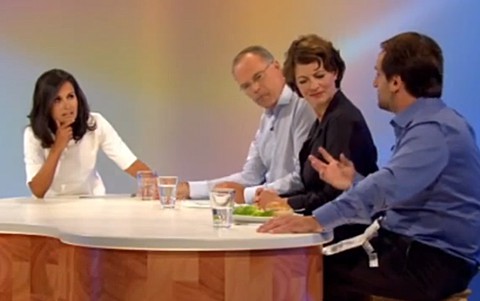 On Friday, Towleroad reported that today the first lab-grown beef hamburger was scheduled to be assembled, cooked, and devoured in the hopes that it would be a viable replacement for that raised in factory farms. 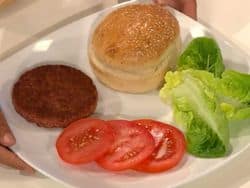 Today, Mark Post, the scientist who led the team, and two volunteers tried it out. The AP reports:

Two volunteers who took the first public bites of hamburger grown in a laboratory gave it good marks for texture but agreed there was something missing."I miss the salt and pepper," said Austrian nutritionist Hanni Ruetzler.

U.S. journalist Josh Schonwald confessed to a difficulty in judging a burger "without ketchup or onions or jalapenos or bacon." Both tasters shunned the bun, lettuce and sliced tomatoes offered to them to concentrate on the flavor of the meat itself.

Mark Post, the Dutch scientist who led the team that grew the meat from cattle stem cells, regretted having served the patty without his favorite topping: aged gouda cheese."That would have enhanced the whole experience tremendously," he told The Associated Press. He said he was pleased with the reviews: "It's not perfect, but it's a good start."

Watch the taste tester discussion, and Google founder Sergey Brin talks about why he funded the project, AFTER THE JUMP…

Sergey Brin, the Google founder who backed the project, talks about lab-made beef:

Previous Post: « Spike Lee: I’m Not Homophobic But My Characters Might Be
Next Post: New York Elected Officials Call on Obama to Spurn Putin Over Anti-Gay Oppression »