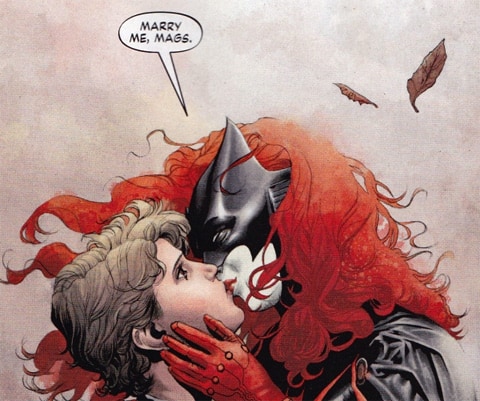 Back in February we wrote about a groundbreaking revelation in DC Comics' Batwoman — that Kate Kane, the Batwoman, asked Maggie Sawyer, her secret girlfriend, to marry her.

Now it appears that marriage is an especially ill-fated one, as in it's not going to happen, and Batwoman's co-authors J.H. Williams and W. Haden Blackman are taking that news public and quitting the comic, accusing DC of getting in the way. 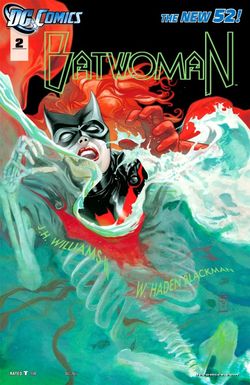 Write the authors on their blog:

Unfortunately, in recent months, DC has asked us to alter or completely discard many long-standing storylines in ways that we feel compromise the character and the series. We were told to ditch plans for Killer Croc’s origins; forced to drastically alter the original ending of our current arc, which would have defined Batwoman’s heroic future in bold new ways; and, most crushingly, prohibited from ever showing Kate and Maggie actually getting married. All of these editorial decisions came at the last minute, and always after a year or more of planning and plotting on our end.

We’ve always understood that, as much as we love the character, Batwoman ultimately belongs to DC. However, the eleventh-hour nature of these changes left us frustrated and angry — because they prevent us from telling the best stories we can. So, after a lot of soul-searching, we’ve decided to leave the book after Issue 26.

We’re both heartbroken over leaving, but we feel strongly that you all deserve stories that push the character and the series forward. We can’t reliably do our best work if our plans are scrapped at the last minute, so we’re stepping aside. We are committed to bringing our run to a satisfying conclusion and we think that Issue 26 will leave a lasting impression.

"Not wanting to be inflammatory, only factual- We fought to get them engaged, but were told emphatically no marriage can result…But must clarify- was never put to us as being anti-gay marriage."

Bleeding Cool notes that Batwoman has won two GLAAD awards for its portrayal of gay characters.

Previous Post: « Is the New Trailer for ‘Gravity’ Worthy of the Best Space Film Ever Made? — VIDEO
Next Post: Russian Lawmaker Proposes Bill to Take Children Away from Gay Parents »