For the first time, Boston Mayoral candidate Michael Ross talks with the Boston Herald about his gay mom, describing what it was like to grow up with her and how it shaped who he is. His mom, Suzanna London, told him she was gay in the early 80's: 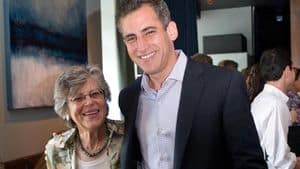 “She’s in love with a woman. What am I supposed to do with this?” Ross remembered thinking back when he was 12 and 13 and anxious, like any teenager, to fit in, not stand out. His response to his mother: anger. “I moved back in with my father for a few months.”

“It was a year,” corrected his mother.

“I didn’t want people to come to my house or ask questions about me and my family,” said Ross. “I never told anyone.”

“But they knew two women were living together in a house,” his mother said. “Kids were cruel.”

At school some called Ross’ mother names. “I’d deny (she was gay). ‘You don’t know what you’re talking about,’ I’d say.”

And no one did talk about it openly. Not at school or in their Newton neighborhood or at temple and Hebrew school. Not even, for a while, at home.

“I was living in the shadows,” London said.

“They were closeted even in their own house,” says Ross, remembering how his mother and her partner slept in separate bedrooms.

“I’m first and foremost a mother. You’re as happy as your most happy child,” his mother said. “I never knew how hard it was for him.”

Ross 's father Stephen was rescued from the Dachau concentration camp, his whole family having been killed by Nazis.

“It’s where my values come from, these two amazing people with radically different lives.”

Previous Post: « Anti-Gay Alternative to Boy Scouts Launches, with Bush Impersonator and Mike Huckabee: VIDEO
Next Post: What Has Ted Haggard Been Up to in the 7 Years Since His Gay Sex Scandal? – VIDEO »