Elton John gives a wide-ranging interview to The Guardian, and says he's going to play Moscow in December: 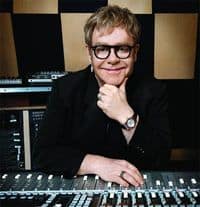 He wants to make another album with the same producer, T-Bone Burnett, which leads him to talk about his other unfulfilled ambitions. He's always wanted to play in front of the Pyramids of Giza, "but they banned me from going there a couple of years ago because I'm gay". It wasn't the first time his sexuality proved an issue: a church in Tobago organised a protest against his appearance there, while he received threats from an Islamic group when he played in Morocco.