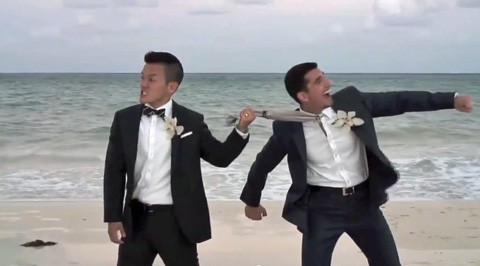 Johnny and Sebastian were married in front of family at the beautifully breathtaking, Banyan Tree Mayakoba in the Mexican Caribbean after being together for seven years. They were also one of the first same sex couples to have their vows legally recognized in New York, at City Hall in NYC.

In the clip you'll see Johnny (left) get emotional while walking out with his mom. He tells us that one of the reasons he was so emotional was that his parents traveled the entire journey of acceptance after hearing he was going to marry a man — literally went from declining the wedding, and not wanting to come at all, just one month prior — to being very invested and engaged that weekend.

Congrats guys! Watch, AFTER THE JUMP…

Previous Post: « What Has Ted Haggard Been Up to in the 7 Years Since His Gay Sex Scandal? – VIDEO
Next Post: James Franco: ‘I Wish I Was Gay’ »