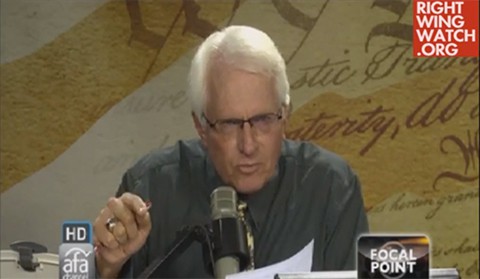 Following the recent closure of an Oregon bakery that previously refused to sell a wedding cake to a lesbian couple and an Air Force officer allegedly being punished by his lesbian superior for objecting to gay marriage, American Family Association spokesperson Bryan Fischer took the opportunity to decry both incidents as examples of anti-Christian hate endemic in Obama's America. Right Wing Watch reports:

Later in the segment, the Focal Point host maintained that President Obama “has made it a criminal offense to be a sincerely devoted follower of Jesus Christ in the United States Military” and accused Obama of “leading this purge of Christians from the military. This is ethnic cleansing, this is spiritual cleansing.”

Check out a video of Fischer's comments AFTER THE JUMP…