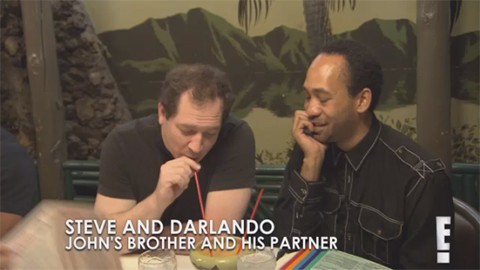 On a recent episode of E!'s reality show Total Divas viewers learned that WWE Superstar John Cena has a gay brother. The show follows the lives of twin female wrestlers Nikki and Brie Bella, a.k.a. The Bella Twins. On the episode in question, Nikki, who has been dating John Cena since at least November 2012 according to TMZ, joined Cena for a rare gathering of his entire family. Among the clan come to break bread were John Cena's brother Steve and his partner Darlando. Other than providing a screen caption introducing Steve and Darlando, the episode of Divas did not provide any additional focus on them or their relationship with Cena.

Cena landed in hot water back in 2011 over homophobic jokes and comments he directed at The Rock (a.k.a. Dwayne Johnson) which prompted the WWE to form a partnership with GLAAD in an effort to "ensure that [their] fans know that WWE is against bullying or discrimination on the basis of sexual orientation." However, last month, after fellow WWE Superstar Darren Young unexpectedly came out to TMZ at LAX, Cena offered his congratulations.

Steven does a killer impression of Stewie from Family Guy that's not to be missed.