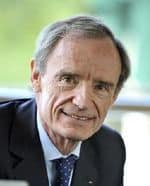 The International Olympic Committee will not challenge Russia's ban on "gay propaganda" because it lacks the authority, it said in a news conference on Thursday, the WaPo reports:

IOC officials told a news conference in Sochi, where they were making their final inspection tour before the Games begin Feb. 7, that they were “fully satisfied" that a Russian law banning gay propaganda does not violate the Olympic charter’s anti-discrimination guarantee, the Associated Press reported.

The committee considered its decision for several days, IOC Chairman Jean-Claude Killy (pictured) said, but finally agreed it lacked authority to criticize a host country’s laws if they did not specifically violate Olympic rules.

Previous Post: « E.W. Jackson Claims His Anti-gay Comments Have Been Taken ‘Completely Out of Context’ – VIDEO
Next Post: Gay Married Military Couple Talks About What It Means to Get Benefits in New Pentagon Clip: VIDEO »