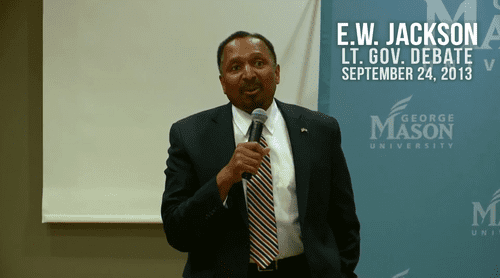 Virginia Republican Lieutenant Governor nominee E.W. Jackson, who claims to know better than the Pope on gays, has also made the outlandish claim that his past homophobic comments have been taken 'completely out of context' and defended his remarks in a debate on Tuesday, explaining that he only uses that rhetoric in sermons. Fortunately, the folks over at American Bridge have put together a super-cut of some of Jackson's comments so you can make your own judgement.

You may also recall Jackson's other 'out of context' claims, including his comments linking homosexuality and pedophilia and his assertion that pro-gay rights liberals 'have done more to kill black folks whom they claim so much to love than the Ku Klux Klan, lynching and slavery and Jim Crow ever did.'