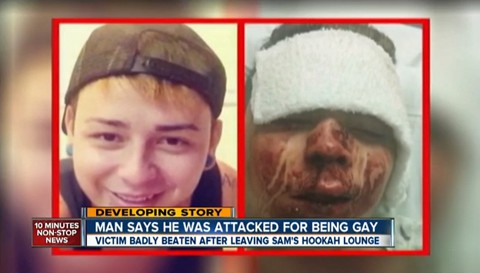 Police in Denver are investigating the brutal attack on 23-year-old Jared Olson as an anti-gay hate crime, ABC7 reports:

The 23-year-old Olson told 7NEWS he and two friends were leaving Sam's Hookah Lounge at 2370 W. Alameda Ave. about 2 a.m. Monday when he and a gay friend were attacked by a man in a group of men in the parking lot calling them gay slurs.

Olson said one man followed the trio when they got in their car, then pulled open the door to the back seat where Olsen and his friend, who's also gay, were seated. The attacker repeatedly punched Olson in the face and also struck his friend. The male friend who was in the driver's seat was not harmed.

Olson said the beating left him covered in blood, with broken bones in his face that will require reconstructive surgery. He also had several teeth knocked out and chipped.

Reconstructive surgery could cost Olson $50,000, he says, and he doesn't have insurance. Friends have created a Facebook page to support Olson.

Previous Post: « Jon Stewart Returns to ‘The Daily Show’, Fun Syrian Jamboree: VIDEO
Next Post: New Video Project from Dan Savage Hopes to Show Anti-Gay Christians are ‘Not All Like That’ — VIDEO »