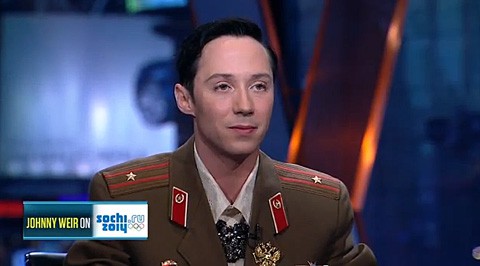 Following his blistering condemnation of Russia's anti-gay laws, the position of Sochi Games officials, and the IOC, Keith Olbermann welcomed Johnny Weir into his studio to ask the gay Olympian what he thinks about how we should be responding to what's happening in Russia.

Weir, a self-described "true patriot and spokesperson for their country" argued staunchly against "a boycott of any kind", saying that it would hurt Olympic athletes. He also argued against boycotts of Russian goods – specifically vodka, arguing that it hurts Russian workers in factories.

Weir, who made the bizarre choice of wearing a Russian military outfit to the interview, was given the chance many times by Olbermann to take a stand as a gay man on the issue, but when pressed to the corner, finally dealt this illogical quote:

"There's really not much of an answer for that other than your perspective on it."